Tax Day is not awesome

You may have noticed that I talk a lot about being awesome.  I think some people are even starting to buy in to my awesome schtick and feel jealous.  This actually cracks me up, because I am no more awesome than you are, or anyone is.  I’m just a girl, trying to figure life out, and more and more realizing that the awesomeness comes from simply doing the right thing as much as I can, striving to be better, always, and refusing to be beat down.  I think most of us do that.  Hence, most of us are awesome.

The only real difference between me and most of you is that probably due to the recent ‘incident’, I really, really, really don’t give a shit at all anymore what anyone thinks or says about me.  That’s why I have the courage to blog what is, in effect, my diary.

I’m not all that sure I ever really did care.  But I’m certain now my persona has been elevated to a place where it was not before.  It’s hard to explain.  Merely surviving has landed me on higher ground.  However, tax day is upon us.  And it reminds me, over and over, of what a loser I am.

For my entire adult life, I have been an organized person.  My paperwork was filed away in neat folders in an organized file cabinet, just the way I like it.  The basis of my job for years was to organize and manage other company’s disasters.  But now, my own life is a disaster, my paperwork is askew, and I feel, tragically, that I’m allergic to paper.  Just touching it makes me miserable.

For nine months I have been in avoidance mode.  Simply avoiding all things that stress me out, at any cost.  Dave and I ran two small businesses out of our home.  He was a contractor, specializing in historic renovations.  His business was booming after Hurricane Katrina.  I was the chaos queen.  I worked on oil spills, handling finance and cost management for the spillers.  Imagine my work load two years ago when there was more oil than water in the Gulf of Mexico.  My unpaid job (in addition to the mommy gig, also known as third job) was to keep us both organized, handle our finances, scream about money, funnel money from one account to another, pay bills, handle taxes, etc.

Every time we spoke about money, we fought.  Every time I worked on his books, we fought.  At tax time, we fought.  He was a mess.  His filing cabinet was the seat of his truck.  He lost receipts and never had a clue whether he was making money or not.  This made me crazy.  I fought him tooth and nail about it for 10 years.  Now he’s gone.  I’ve filed extensions for two years in a row.  Still haven’t filed my 2010 taxes.  Paid a big wad of money with the extension in 2010….and have no clue whether it was enough or not.  I might owe them $10 or I might owe them $10,000.  Hell, they might even owe me money.  I don’t know.  And, sadly….I don’t care.  Because I don’t want to look at his stuff.  Don’t want to touch his stuff.  Don’t want to live through any of it anymore.

The reason is that the days come alive when I look back at his files, his accounts, his handwriting, his notes.  And I can’t bear to relive any of those days.  I know a monkey is going to jump off my back when I put all this shit to rest.  I know the avoidance and procrastination weigh me down.  I want to be free of it…but apparently not enough to actually look at it for long periods of time.   I’m a LOSER.  On Friday I was frantically issuing 1099s to some of our workers, because I’m such a loser I avoided doing them for this long.

The truth is that I didn’t want to deal with his workers either.  They make me cry.  They miss him so much.  They cry to me.  Some of them worked for him for a long time.  One of them has been holed up in his mom’s home for the last 9 months, suffering from agoraphobia and unable to leave the house.  I forget that this has affected other people.  I forget that, outside of my little cocoon, other people are still missing him and mourning him.

My way of coping is to not think about it.  Not deal with his stuff.  I cleaned his desk out months ago by just dumping everything into boxes and shoving it in the closet.  FAKER.  People keep saying to me 'just bring the boxes to a CPA'.  I wish I could.   I wish filing my taxes meant just gathering W-2s, 1099s and a few other things.  We don’t have those things.  We are two self-employed people.  Millions of dollars went in and out of our accounts over the years because of our businesses.  Just so we’re clear…we didn’t MAKE that much money, it merely passed through.  Keeping track of a messy, uncaring, avoiding and addicted contractor is a nightmare. And so for the last couple years, I avoided dealing with him too.

Today, I vow to start conquering this nightmare.  And if I do, if I get this all neat and tidy, then, I will be one awesome motherfucker.  Ya hurd me?  I will be the Queen of Awesomeland. 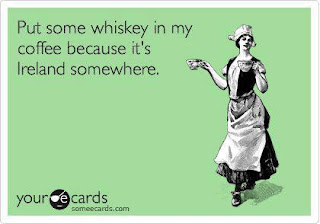