Divorce is like death, and other phrases that make me punch you

I think at some point we’ve all heard the phrase, “Divorce is like death.”  I probably have stupidly even uttered this phrase, at some point in my life.  However, you may have noticed there aren’t a whole lot of bereaved people standing around at funerals going, “It’s ok, this is just like a divorce.”  I understand that there is sadness and even trauma associated with a marriage ending, a family being torn apart, etc.  Part of your life does ‘die.’  But let’s get real here, people.  Because if another one of you going through a divorce exclaims to me that you wish your spouse were dead, and insanely imply that “I’m lucky”…..I’ma knock you on your ass.  Ya hurd me?


I’ve had several people say this to me, and it happened again this morning in a group of people.  The particular mutha this morning was lamenting her divorce.  The husband is being an asshole.  I get that.  He was an asshole during the marriage though, so what exactly did you expect?  Women do this thing, constantly, where they try to control the man’s behavior.  Impossible.  Stop doing that.  No one has ever been successful in that endeavor.  You cannot get a person to do what you want by using threatening words, by manipulating finances, or by using your children as pawns.  An asshole is just going to be….an asshole.  Doesn’t matter what you say.


During my conversation with this particular mutha today, she said a few things that resonated with me.  One was that her daughter misses her daddy, so she’s been emailing him.  Really?  Well, that is super cute and great, but you do get that dead people don’t email you back, right?  In another breath, she said the husband hadn’t bothered to respond to one of her texts when she wanted to tell him about something cute one of the kids did.  That is terrible, indeed, but you get that there is no texting dead people, right?  They never respond.  In fact, their phones are cut off.  She said the kids were upset and missed him, and he seemingly didn’t even care.  Wow.  Imagine, then, how upset they might be if he were DEAD.  She said he hadn’t seen the kids in over a week.  Again, shameful.  But if you truly wish death upon him, I hope you understand he will be seeing them NEVER.  Oh, you want him to take the kids, because you need a break?  Nada.  No dice.  Ghosts are not good babysitters.  You would probably get arrested for leaving your kids with a ghost babysitter.


I’ve even been told that I’m lucky, because at least I have some life insurance money.  Really?  What amount of money would you give to see your kids happy?  To undue a tragic event that forever changed their lives in a bad way?  If you don’t say “every dime I have,” then you’re a liar.  All of you would give all your money, and all your limbs, to undo this in your family.  I promise.  Trust me that no amount of money serves as consolation for the tragedy of suicide.


I want to be clear, I am not mad at these people (even though I still may punch them.)  I understand that these words are spoken by people who are hurting.  By people who are traumatized by divorce.  The crazy words and feelings are being expressed because going through the divorce has so negatively impacted them that they just want it to stop.  They are so hurt, that the person disappearing altogether seems like a great idea.  I get what they’re saying.  But compose yourselves, people.  Think about what you are saying.  Think about to whom you are speaking.  The pain of divorce is temporary.  Those hurt feelings, they won’t last that long.  Three years from now, you will not give a tiny fuck as to what your ex is doing.  Picking up and dropping off those kids and figuring out Christmas and summer visits is going to be mundane.  Your kids can still call the other parent, can still hug and cuddle, can still see he or she sitting in the bleachers.  My kids can’t do that.  So, no, I’m sorry to inform you all, but divorce isn’t like death.  Divorce is like divorce.  ‘Cause death means you are dead.  It doesn’t mean you’re ‘like divorced.’ 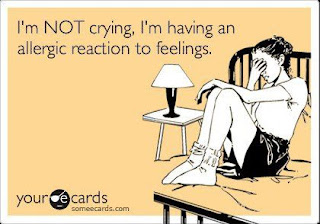