Laugh To Keep From Crying

The dreaded birthday was just another day, mostly.  We spent it at the swim club with friends, and I didn’t tell the kids it was his birthday.  I just couldn’t.  I just can’t deal with it.  And I don’t feel like making them deal with it either.  People have great ideas about what you should do to honor the dead person’s birthday.  Maybe one day we’ll be able to honor him.  Right now, all I can say about being honorable is that I haven’t kicked his grave in quite some time.


We had a party here today with my family.  I finally decided yesterday that the absurdity must come to an end, and I discarded the dead plants that have been in the pots on my front stairs for probably 3 months.  Anyone who knows me knows how outlandish this is….me, with dead plants.  I’ve been known to landscape people’s houses when they’re on vacation.  I pull weeds in people’s yards while I’m standing there talking to them.  I pull over and tell neighbors that what they’ve just planted is going to die where they planted it, from too much sun.  I never have dead plants.  I always have pots with beautiful flowers spilling over the sides.  Except lately.  I swear I am just too busy.  I have zero time for extra stuff.  Zero additional energy.  I replanted the pots with lively flowers and finally painted the downstairs bathroom.  Painters are extremely underrated.  I say that every time I paint, especially when I step back into the tray and flip it slightly over.  My painter could paint my whole house without a drop cloth if he wanted.


Certain members of my close family brought ‘new people’ to the party today.  As in new people they are dating.  Which meant that yesterday, there was a definite uptick in the usual but always humorous array of family texting.  Not much slides past this group.  A sense of humor is definitely required.  We judge one another harshly and openly, but all out of intense love.  It’s just how we roll.  We cannot gather without mocking and teasing.  If we haven’t seen one another in a while, mocking videos may be exchanged to hold us over.  With new ears joining the fray, some were almost giddy with excitement.  Luckily the new people scored 10’s from everyone today.  One person got extra points for being somewhat famous.  Hopefully we weren’t too frightening for them.  It's amusing to see the competitiveness at play here too. Picking teams for a simple game of whiffle ball can take 20 minutes, because each person must be certain their team will win.  At Easter, I had to play barefoot because I had worn heels, and I swear the bottom of my feet were almost bleeding.  My dad, who has had heart surgery, was completely winded and scaring us, but still sliding home and knocking over 10 year olds.  We never stopped laughing or trash talking the whole time.  Today was no different.

My family is the type who can find some way to laugh, even at funerals.  Of course I did not laugh at all during Dave’s funeral, and I’m pretty sure none of them did either.  I will kick their asses if they did.   Someone reminded me that my sister was in the back of the church saying she was about to saw the fucking casket in half.  Other people probably laughed at that, I doubt she did.  We did have a lot of inappropriate laughter afterwards.  Of course, everyone wanted to know about the robbery.  When we started telling the story and acting it out for the first time, we were overcome with laughter due to the utter insanity of it all.  That morning we had literally said goodbye to the police, raced to get everyone dressed, and then drove straight to the church.  No time for de-escalation, we were almost late for the funeral.  People unaware of the situation must have thought we were nuts, although I think most people knew as the news spread like wildfire.  The church that morning was a distraught mob of people whispering intently and crying hysterically and mostly just trying to figure out if it were all some crazy dream.  Rumors were rampant.  People were just stunned.  We were most definitely as fucking crazy as people could honestly get.  Ever.  I think back to that morning, and I have no idea how I survived.  It wasn’t pretty.  Surely that didn’t happen to me.  It’s just so surreal.  All of it.  I swear if I don’t laugh, I’ll surely die. 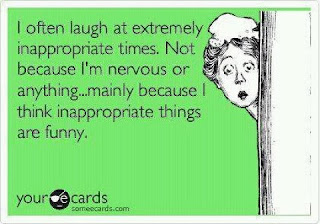