Things have been really great.  The last couple weeks have been awesome.  It’s been such a welcome reprieve.  Tonight, though, we had quite a moment.  Everyone started crying at the same time.  It was so sad.  So fucking sad.  I realized while I was sobbing that I no longer cry ‘for Dave’ at all.  I cry for my babies.  I cry on behalf of them.  I cry because of what he did to them.  Bastard.


The baby started it, by suddenly declaring that he was sad.  At first I thought he said he was ‘scared’, and was trying to delay going to bed.  Then I realized he was about to cry, and he blurted out in sobs, “I miss Daddy and I want him to come home.”  I broke into a million little pieces.  I gently reminded him that Daddy cannot come home because when you die you can’t ever come back.  He said something like, “Why is he just gonna die again and again and again?”  Then middle darling started crying really hard.  Sobbing that he misses daddy.  I pulled both of them on top of me and we held each other and cried long and hard.  And all my tears were for them.  I can’t cry for him anymore.  I just can’t.


Big darling was in his room reading, oblivious to the grief ninja’s attack.  This in itself worries me.  He doesn’t cry.  He doesn’t say anything.  It makes me nervous.  The silence is scary.  When I ask questions, he admits to missing Dave and feeling sad, but says he mostly doesn’t think about it.  I asked him about feeling angry towards him, and he says he is angry.  I confess that I am more than a little angry myself.  I tell him it’s ok to be angry.  I tell him that his silence worries me.  Goddamn you Dave, if my kids are fucked up one iota because of you, I will do fucking nothing to you, because that’s what I can do.  Nothing.  You rat fucking bastard.


Someone asked me the other day about whether or not my stepdaughter reads the blog.  If you haven’t read all of the blog, you may not even be aware that Dave has a 17 year old daughter from a previous relationship.  The answer is yes, she does know about the blog.  I do not blog about her because she is not my child.  I don’t have a relationship with her parents, and I wouldn’t want someone blogging about my own kids without my permission, so she is absent from the blog.


What does she think about me writing about her daddy?  I have no idea.  I don’t write based on what people are going to think about the writing.  If I wrote that way, this would be a really short story and it would be incredibly boring and also not true.  Therapeutic value - zero.  Go read a grief brochure or one of those generic parenting sites if that’s what you want.  That stuff makes my eyes roll back into my head.  BORING.  I get bored easily.  I can be obsessed with something one day, and I’m not kidding not a day later I will drop it like a hot potato.  It takes a lot to hold my interest.


Sometimes I think about people judging me.  But then I realize something.  If you are judging me, fuck you.  Just fuck you.  It is liberating to not care.  It is liberating to be brutally honest.  I do try not to hurt the feelings of others.  I haven’t been perfect with that part.  Sometimes I’ve been so hurt that I have deliberately lashed out and not cared.  So, I’m an asshole.  The events of the last few years have rendered me incapable of caring about some things.  My survival instincts are so strong, and ever present, because we are always fighting the beast here.  Your day is good, the sun is shining, you are humming along, and out of the dark shadows steps the beast.  He strikes you.  Then hands you your ass.  A couple hours later you are walking in the grocery store.  You are not the same as the people around you.  Most of them didn’t participate in a battle of that magnitude today.  Your emotions are still scrambled.  You are still reeling from the pain.  You are still distracted, tired, annoyed, confused, sad, angry, guilty.  Everyone else is just buying groceries.  I want to just buy groceries.  I do.  Sometimes, maybe even I do.  Sometimes I’m not thinking about it.  But mostly I am.  It’s becoming me.  A part of me.  And I can’t rewrite it.  I can’t lose it or kill it or burn it down.  I can only keep fighting it.  Which keeps me in attack mode.  The shrapnel is always flying.  On great days the love pours out of me and I’m invincible.  On mediocre days, the humorous sarcasm protects me.  On shit days, I’m an asshole.  C’est la vie. 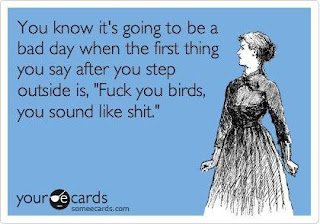